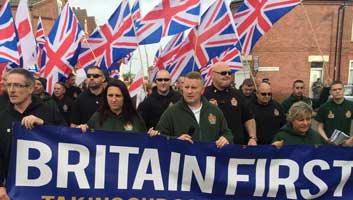 Britain’s radical right is at a worrying crossroads. ‘[P]olitically marginalised, fractured, leaderless and increasingly violent’, Britain’s radical-right is now more ‘isolated and in retreat’ than at any point over the past twenty years – ‘becoming more extreme and violent’ in the process. Despite popular outbursts of nationalism and xenophobia after the 2016 EU referendum, it has signally failed to make increases in the electoral arena – with its only hope, UKIP, scoring only 600,000 votes at the UK’s 2017 General Election. This has led to a style of activism that has become akin to vigilantism in nature – performing direct action stunts that can be filmed using video recording equipment and posted online for the consumption of thousands of viewers both in the UK and abroad. Never before has it been so easy to view and access radical right propaganda online. In this article, I will focus one group that typifies this trend, registered political party and anti-Islam street protest movement, Britain First. Here I will discuss its modus operandi, ideology and future prospects as one of the key actors on the UK’s radical right scene.

Formed in 2011 using the ‘British Resistance’ website, Britain First was founded by former BNP fundraiser, Jim Dowson, and Sevenoaks Councillor, Paul Golding. As one June 2014 report on the group by anti-fascist collective, Hope not Hate, has suggested, the group distinguishes itself ideologically from the BNP by eschewing ‘the scientific racial hatred and ideas of racial supremacy in favour of dire biblical warnings…in the face of the supposed ‘Islamification’ of Britain.’ Looking beyond anti-Islam ideology, however, Britain First is most famous for its direct action tactics – whether that be invading Mosques, driving ex-military land-rovers down Brick Lane or conducting flash demo’s in predominantly Muslim areas up and down the country. This not to say that the group has not been active in the electoral arena – contesting European, Parliamentary and Local Elections over a two year period. It is, however, to say that the group has been least successful in this area – peaking in May 2016’s London Mayoral vote. As we can see from the below graph (Figure One), this fallow electoral period (June 2014-May 2016) was followed a resurgence in the groups direct action activities (May 2016 – August 2017).

Since the run-up and subsequent result of the 2016 EU referendum, however, Britain First has been in terminal decline. The most obvious reason for this is the group’s overt associations with the killer of Jo Cox MP in Birstall in the run-up to the referendum but also a string of actions by police after this incident. For example, after a civil injunction was secured against the group in August of 2016, Britain First leader, Paul Golding, was arrested and jailed for eight weeks after attempting to enter a Mosque in Cardiff. Moreover, a sustained campaign against a set of takeaway shops in Ramsgate has meant the current leader, Paul Golding, and deputy leader, Jayda Fransen, have both been imprisoned for religiously and racially aggravated harassment (Rawlinson 7th March 2018). Finally, the pair have also been on the receiving end of court action in Belfast for comments made at a ‘Northern Ireland Against Terrorism’ rally in August last year. With both of its leaders facing prison for religiously and racially motivated forms of harassment, it is unclear whether it can sustain the provocative offline activities that have fuelled its online success – both in the UK and abroad.

In sum, then, all we can say on the matter is that (as of the start of 2018) Britain First appears to be in terminal decline – unable to mobilise on the streets and organise for elections in any great number. This is both symptomatic of the organisational predicament that the group finds itself in at the moment (with both of its leaders serving prison sentences for previous campaigns) but also is further symptomatic of the electoral marginalisation of the UK radical right over the past decade. Moreover, and more interesting from a PVE perspective, it is noticeable that Britain First’s recent troubles (more so than the EDL) are causally connected with a broad swing by the UK Government and local police authorities against radical-right extremism in the UK since the untimely death of Jo Cox. With the proscription of National Action and a civil injunction taken out against Britain First, this new, caustic political and legal environment has made it increasingly difficult for Britain First to mobilise and carry out its provocative actions. On a final note, it is perhaps useful to posit historical examples of similar organisations when trying to characterise the group. One that comes to mind are A.K. Chesterton’s League of Empire Loyalists (1954-66) that, while different ideologically (standing for anti-Semitism and the maintenance of Empire), carried out similar provocative stunts to bring attention to their cause. With Britain First unable to do this, it is likely that their star will fall even further. What we have to therefore look out for is a legitimate successor.

Dr William Allchorn is Associate Director at CARR, and a postdoctoral researcher at Leeds University. See his profile at:

© William Allchorn. Views expressed on this website are individual contributors’ and do not necessarily reflect that of the Centre for Analysis of the Radical Right (CARR). We are pleased to share previously unpublished materials with the community under creative commons license 4.0 (Attribution-NoDerivatives).