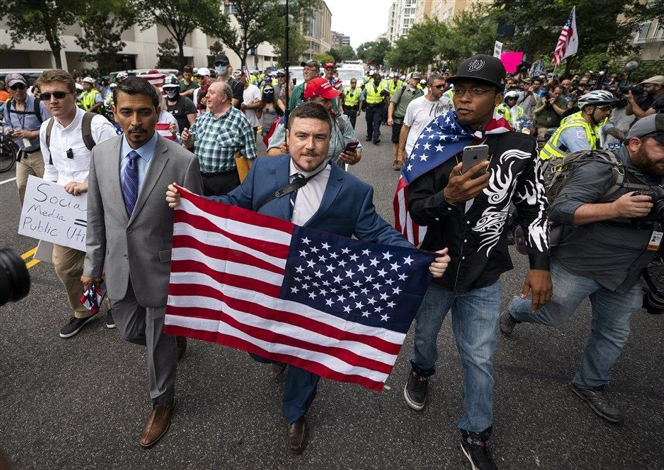 When reporters attempted to interview two protestors at the ‘white civil rights rally’, otherwise known as Unite the Right 2, on 12 August in Washington, D.C., the men obscured their faces behind American flags and refused to answer. These men were not alone in their tight grip on the American flag; almost every single radical right marcher carried an American flag or wore one like a cape as they took to the streets of the American capital. This rally was demonstrably different from its predecessor—there were only roughly 25 protestors compare to hundreds last year, no violence broke out, and protestors this year were draped in American flags. This appearance of the American flag is no accident. There has been a marked shift in the flags carried and worn at radical-right marches and those incorporated into the symbology of radical-right groups in America in recent years; radical right groups increasingly drape themselves in the American flag at public events as they advocate for extreme changes to American society. The increased substitution of the American flag for other, more controversial banners that has been observable within the last year is not done in order to dissociate from the violence of Unite the Right in Charlottesville or from past extreme ideologies, nor is it a reaction to the controversy over the American flag and national anthem that has been a contentious point in the ‘culture wars’ of America. In fact, the presence of the American flag at these events is the culmination of a much longer reckoning about optics and respectability within the radical right.

The Politics of Flags

Theorists have long claimed flags to be part of nationalist territory. In his famous work Banal Nationalism (1995), Michael Billig acknowledges their central role in group identification and the reinforcement of collective values. Flags and banners project the image of a group united by shared ideals, while simultaneously evoking a tribal, positive emotional response from those who identify with that collective. America has long been noted for its particular veneration of flags—what Ernest Renan called ‘the cult of the flag.’ Scientists have found that Americans report to feel a sense of pride and reverence towards the American flag and, vicariously perhaps those who walk beneath it. In fact, so sanctified is the idea of the flag that the American government has codified regulations—the US Flag Code—regarding the display of national flags, going so far as to state that the American flag not only representsAmerica, but ‘is itself considered a living thing,’ thereby commanding respect and reverence from all who interact with it. In America,carrying a flag or draping oneself in one represents a significant act. It is for this reason that the shift in the policies of the radical right toward flags holds genuine importance.

Historical Uses of Flags in the Radical Right

Throughout the twentieth century, radical right groups have marched down American streets under the banners they felt best expressed their ideologies. In addition to their infamous robes, when the Ku Klux Klan originally took to the streets, they did so carrying American flags. Photographs of the 1925 KKK March through Washington, DC, in which 30,000 Klan members participated, capture almost exclusively American flags being carried by marchers and waved by supporters. However, by the 1990s, and as the group became increasingly alienated from mainstream American politics, at public events, KKK members preferred to carry the flag of the Confederacy or state flags, and fewer and fewer American flags were present.

Before World War II, Americans sympathetic to the Third Reich rallied around Nazi flags, as did Neo-Nazis in the post-war era. Neo-Nazis also adapted the American flag to include the swastika and other Nazi iconography. Photographic evidence from more recent mass gatherings of Neo-Nazi groups, such as the 2006 National Socialist Movement rally in Lansing, Michigan, show that there were almost no American flags amongst the brown-shirts.

The shift in the flags used by radical right groups in public functions seems to have begun in November 2016. The National Socialist Movement (NSM)—the largest Neo-Nazi organisation in America—announced less than one week before the Presidential Election that it would cease to march with the Nazi flag or any flag with a swastika. ‘The NSM will be ceasing public use of the swastika effective Nov. 5th, 2016. Our flags and banners now bear the Odal Rune, and our patches will soon follow suit,’ announced Commander JeffSchoep.

Nevertheless, the swastika and the Third Reich’s flag were by no means absent from the Unite the Right Rally in August 2017. The Nazi flag in fact intermingled with Confederate, Gadsden, Identity Europa, the new NSM, and a handful of other, individually-designed flags brought by radical right protestors. While American flags were flown or worn by some, they were in the minority, often lost within the crowd of other flags. Aside from the frenetic energy brought by the nature and actions of the event, there was an incoherence with regards to the radical right: so many different flags denoted so many factions and no single, digestible ideology.

The negative publicity stemming from the violence and death of Heather Heyer at the Unite the Right rally in August 2017 by no means ushered in a new idea about which flags radical right groups should carry at public events; however, it did represent a catalyst for rapid change within the overall politics of flag-waving in the radical right.

Within weeks of the event, Andrew Anglin, editor of prominent Neo-Nazi website The Daily Stormer, told readers that the radical right movement would be best served if it put away the swastikas. Unlike the NSM, though, Anglin suggested that there was no need to create a new symbol for their movement, but should start rallying beneath the American flag. This idea was quickly taken up by Greg Johnson and Donald Thoresen of Counter-Currents Publishing, another popular website among White Nationalists. In an article for the blog, Editor-in-Chief Johnson told his readers the he and Anglin ‘agreed that Nazi flags are bad for optics at public rallies like Unite the Right in Charlottesville.’

Over this past year, there have been numerous radical right rallies, marches, and other public events; and, while some individuals still bring Confederate and Nazi flags, there is a discernible increase in the use of the American flag, and a substantial decrease flags with obvious White Nationalist messages.

This leads us back to the Unite the Right 2 rally outside the White House. While its organiser, Jason Kessler, stated that only American and Confederate flags would be welcomed at both Unite the Right and Unite the Right 2, participants in this year’s rally were far more compliant.

The increased prevalence of American flags at radical right rallies should be attributed to a series of factors all stemming from the profound importance that these groups place on optics, rather than ideology, to win supporters and effect political change. The thousands of messages in private chat rooms among organisers about the best aesthetic for the radical right to present, attest to the fact that the adoption of the American flag has been an intensely debated and strategic move made with non-members (‘normies’) in mind.

For some radical right groups, flags or symbols otherwise noxious to mainstream viewers are ill-suited. In some pro-fascist organisations that have rallied in cities like Portland, Oregon in recent months, there is no racial element to their ideology and members are drawn from a multiplicity of racial and ethnic identities. Given that their aspirations are non-racial or religious, racist symbology is irrelevant to these groups and thus are not adopted by supporters. Radical right groups choose to use the American flag, moreover, because they do not see their aspirations of a fascist or proto-fascist America as a disavowal of American ideals, but rather improvement upon them. As fascistic groups are attending public rallies with increased frequency and in greater numbers—while White Nationalists are proving far more hesitant to rally openly—observers are increasingly likely to see American flags at radical right events.

When White Nationalists have surfaced in force publicly in recent years and months, they too display a greater use of the American flag, which they admit to be an entirely strategic decision. The NSM articulated the motives for its abandonment of the swastika at rallies (members are still permitted to display them at private functions or in their homes) to its members as follows:‘The masses believe as we do, but have steered clear of us due to our use of the swastika. Your Party Platform remains the same, your Party remains unchanged, it is a cosmetic overhaul only.’

Andrew Anglin’s argument for the need to drape Neo-Nazism or White Nationalism in the American flag is likewise based on aesthetics, rather than a change in values. He claims that the negative associations with White Power or White Nationalist symbols has alienated members educated to automatically reject those symbols and the ideas for which they stand. Thoresen promotedthe benefits of ‘racialists,’ as he calls them (they are more often identified as White Nationalists), carrying the American flag at public events because ‘If an American flag can draw more people close enough to us to hear our message, it is our dutyto make use of that tool.’ Thoresen also argues that when average white Americans look at the national flag they feel a knee-jerk patriotism, as well a sense of national pride or nostalgia for a time when the American flag was symbolic of a white-dominant nation; he claims that the sight of the flag to non-white Americans will serve only to remind them of their alienation from the nation. These divergent reactions, it is argued, entrench racial tensions that can be used to the advantage of White Nationalists.

The debates about the flag and anthem protests in the National Football League have stirred great debate among Americans, a tension that radical right groups have noticed and believe can be used to their advantage. Many Americans feel uncomfortable or actively disapprove of this method of protest which they believe demonstrates a lack of respect towards the flag, and so many radical right groups have written about how their use of the flag may start conversations with individuals holding such pro-flag beliefs, subtly drawing them in to the radical right movement.

Ms Bethan Johnson is a Doctoral Fellow at CARR, and a Doctoral candidate in the Department of History at the University of Cambridge. See her profile here.

© Bethan Johnson. Views expressed on this website are individual contributors and do not necessarily reflect that of the Centre for Analysis of the Radical Right (CARR). We are pleased to share previously unpublished materials with the community under creative commons license 4.0 (Attribution-NoDerivatives).