A few days after the Westminster Bridge terrorist attack on 22nd March 2017, a Midlands-based youth worker arrived at work to find a group of teens gathered around a tablet, engrossed by a video. This was a group that had hitherto displayed no regard for politics or current affairs. To that point, they were largely disengaged, disinterested and disenfranchised.

But in late march 2017 they were watching a YouTube video featuring Tommy Robinson (real name Stephen Yaxley-Lennon), recorded in Westminster in the immediate aftermath of the murderous vehicle-ramming attack. Before full details of the incident had been confirmed, Robinson angrily shouted “We are at war…Our government have failed us,” before declaring, “This is an Islamic jihad attack…It’s got everything to do with Islam.”

The gritty, confrontational, slickly produced video clearly resonated with these teens. They were captivated by what Robinson had to say and it seemed that he was speaking on their behalf, asking questions that they felt had been ignored. He was angry. And, after watching the video, so were they.

At the time of writing Robinson’s provocative video has received over 1.6 million views.

As a practitioner working in Prevent, I have encountered many young people attracted to radical right extremism because they felt that it finally gave them a voice. For many, publicly showing their support felt like the first time they’d been listened to. Rightly or wrongly, their perception was that government and authorities were only interested in meeting the needs of minority communities whilst, at the same time, they were ignored or dismissed. This sense of personal grievance can be very powerful, especially since extremists and divisive groups often provide seductive answers to complex, controversial issues. Regardless of whether their grievance is justified or otherwise, it is important that we try to understand it and promote constructive ways to deal with it.

Accordingly, together with Streetvibe, a Midlands-based young peoples service, we set about developing a project that would resonate with young audiences. RealTalk is an interactive workshop using innovative technology to raise awareness of radical-right extremism, in challenging ethnic and religious stereotypes, and in encouraging debate and critical thinking skills.

A central strand of RealTalk’s workshop uses augmented reality, a mixture of real life and virtual reality viewed through a tablet or smartphone, whereby life size banners of various individuals effectively come to life to share their personal experiences. Participants hear directly from diverse voices including a former gang member; a former English Defence League organiser; a former football casual hooligan; and a former recruiter for the neo-Nazi paramilitary group, Combat 18. Their stories run directly counter to the preconceptions that people may have had about them based solely on their appearance. 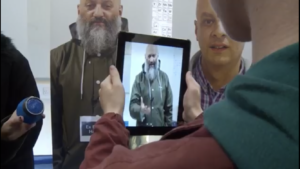 For instance, during one of our pilot sessions a student pointed at the banner showing a Muslim female wearing a niqab. In response, she said: “Spot the terrorist”; a disturbing comment that was challenged as soon as the augmented reality kicked in. It turned out that, instead, the person on the banner is a friendly blogger and tech enthusiast with a passionate outlook on life that completely refuted this stereotype. Religious observance or conservatism is clearly not a sign of extremism, even if many people resort to lazy prejudices – in part due to negative media portrayals of Muslim communities. RealTalk challenges these generalisations head on, encouraging people to see beyond them. 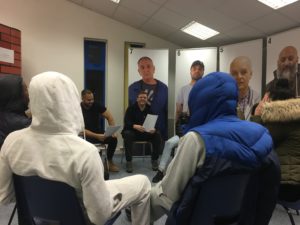 In addition, RealTalk tackles issues relating to so-called ‘fake news’ and radical right propaganda. RealTalk uses local and national case studies in doing this, and offers analytical tips on how to effectively sort fact from fiction, to read between the lines. In this respect, one of the best pieces of advice I’ve received came from a surprising source: my then-5 year old daughter told me to check my news from three different places before deciding what to believe; a tip I have shamelessly stolen for our workshops!

Finally, the workshop makes use of a magnetic wall to represent the political spectrum, as well as cue cards featuring a variety of organisations – from extreme right-wing groups, radical right groups, far left groups, and mainstream political parties. One challenge for participants is to place the cue cards at appropriate points on the wall to symbolise where the groups fit in the broader landscape. This raises questions of interpretation regarding how students perceive groups such as Britain First and the English Defence League, amongst others, and sparks discussion about what constitutes an extremist group. 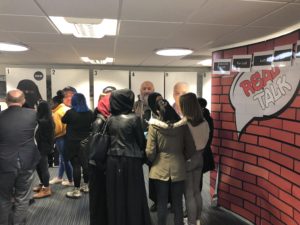 Extremism encourages people to view the world in binary, black and white terms. RealTalk’s aim is to introduce shades of grey and encourage deeper thinking and dialogue in order to promote critical thinking and build resilience against radicalisation.

Of course one student workshop cannot be a panacea to extremism. Nor can we compete in budgetary terms with organisations like Rebel Media, which produced the Tommy Robinson video. Between June 2016 and May 2017, in fact, the Canadian-based far right website raised $1.54 million in crowdfunding alone. But RealTalk is only one of hundreds of Prevent projects that take place across Britain. In 2015/16 142 community-based Prevent projects took place, reaching over 42,000 people. Although in its infancy, RealTalk is already is already having a tangible impact. Following a recent workshop a student confessed that it made them self-reflect and realise that maybe that person was “a bit racist”; a startling but earnest admission. To date, 100% of feedback indicates that students felt that their knowledge of extremism increased as a consequence of RealTalk.

As this case study suggests, Prevent deals with all forms of extremism – not just Islamism. Indeed, four out of the fourteen terrorist plots that were thwarted in the past year were inspired by far right extremism.  Currently, one third of Prevent referrals nationally relate to the far right. It is vital to build resilience amongst all of Britain’s diverse communities against the growing threat of political extremism. That is where projects like RealTalk can shift thinking in creative and positive ways.

Mr Sean Arbuthnot is a Policy and Practitioner Fellow at CARR, and is a local Prevent Co-ordinator & Training consultant based in the UK. See his profile here.

© Sean Arbuthnot. Views expressed on this website are individual contributors’ and do not necessarily reflect that of the Centre for Analysis of the Radical Right (CARR). We are pleased to share previously unpublished materials with the community under creative commons license 4.0 (Attribution-NoDerivatives).