The radical right marches on

The radical right is on the march throughout Europe. In France, Marine Le Pen’s Front National (FN – National Front) gained 33.9 % of the popular vote (10,638,475 votes) in the second round of the French presidential election in 2017. In short, the FN had doubled its vote total compared to Jean-Marie Le Pen’s presidential run in 2002. The Freedom Party of Austria (Freiheitliche Partei Österreichs, FPÖ) was invited into the Conservative-led coalition government in 2017 and its presidential candidate gained a stunning 46 % of the popular vote in 2016. Railing against immigrants and refugees, the EU, and the financier George Soros, Victor Orbán was recently re-elected prime minister in Hungary. Two scholars of the radical right, Pytlas and Mudde, insist that Orbán’s government is ideologically on the radical right (like Jobbik, the Movement for a Better Hungary,[1] the country’s second most popular party).[2] In 2015, Orbán even called for internment camps for illegal immigrants. After the 2017 federal election in Germany, the anti-immigrant Alternative for Germany (Alternative für Deutschland, AfD) became the third largest party in the country, gaining 94 seats in the Bundestag. This was the first time the party won any seats in the Bundestag. 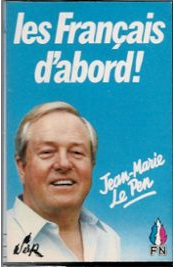 Yet, it should be pointed out that the early successes of one radical right-wing party, the French FN, could be dated back to the 1980s. Under the charismatic leadership of Jean-Marie Le Pen, the FN gained seats in local, regional, national, and EU elections by ‘focusing on immigration – the bread and butter of the contemporary radical right.’[3] The FN thus built the template for the successes of all radical right-wing parties from the United Kingdom Independence Party (UKIP) to the Swiss People’s Party[4]: Play the anti-immigration card. De Lange notes how by the 1990s and the new millennium radical right-wing parties joined coalition governments in Austria, Denmark, Estonia, Italy, the Netherlands, Norway, Poland, Romania, and Slovakia.[5]

I recently penned a piece called ‘The Radical Right and Nationalism’ in Jens Rydgren’s edited volume called The Oxford Handbook of the Radical Right (Oxford University Press, 2018).[6] The book contains a whopping 760 pages. It is an overview of the latest scholarship on the radical right. It consists of 34 chapters. The early chapters are an intriguing read, including pieces on the radical right and Islamophobia, antisemitism, populism, fascism, and Euroskepticism by leading intellectuals studying the radical right.[7] It also includes case studies on Russia, the USA, Australia, Israel, Japan, and various countries in Europe. In my estimation, chapters on a number of countries in Latin America would have been useful. After all, the eminent historian of fascism, Stanley Payne, suggested that Juan Domingo Perón in Argentina was one of the few fascists outside of Europe after World War Two.[8]

Interestingly, it was a year earlier that The Oxford Handbook of Populism (2017) was released.[9] It is edited by Cristóbal Rovira Kaltwasser, Paul A. Taggart, Paulina Ochoa Espejo, and Pierre Ostiguy. This work is divided into themes rather than country-based case studies. Differing from The Oxford Handbook of the Radical Right, this edited volume saw populism as the defining feature of the new radical right-wing parties.

In contrast, I suggest that populists come in many ideological stripes from the radical right to radical left and beyond. Moreover, the defining feature of political parties (such as the FN, FPÖ or Jobbik) is ethnic nationalism rather than populism. That is, these parties privilege ethnic as opposed to more liberal, civic variants of nationalism.[10] Ethnic nationalists valorize tribal solidarity, an emotional and mystical connection to an idealized past, and national development. In contrast, civic nationalism focuses on liberal universalism, rationality, individual rights and self-transcendence, and a community of numerous sovereign states living in harmony. Civic nationalists stress the unity of all social and ethnic groups born on the national territory. In theory, they provide members of dominant and non-dominant ethnic groups with access to citizenship, welfare benefits, and government jobs. In contrast, ethnic nationalists promote national preference, which allows the state to privilege nationals or ‘pure nationals’ above non-nationals.

Discourses of the radical right

In my piece, I examined seven of the most common discourses used by the radical right linked to ethnic nationalism – the key animating feature of this radical right family.

1) The first discourse I identified linked to ethnic nationalism were fears of threats to cultural and national identity and even ethnic survival stemming from:capitalist globalization, Americanization, terrorism, and especially pro-immigration ‘demographic swamping’ and cultural ghettos created through the growing presence of non-white and Muslim immigrants, refugees, and asylum seekers.

2) The second discourse I identified at the heart of the radical right’s ethno-nationalist conception was a perception that established national political parties and the EU ‘collude’ to create a permissive immigration regime and support multiculturalism, which in turn leads to the ‘destruction’ of the nation and ultimately a ‘one-world civilization’.[11]

3) The third discourse was centred around the idea that various EU states spend too much money on a welfare state designed for immigrants, refugees, and asylum seekers to the detriment of ‘original’ European nationals.

4) The fourth discourse was about the notion that government jobs, citizenship laws, state support for corporations, or educational curricula discriminate against nationals and favor ‘foreigners.’

5) In the fifth discourse, I identified foreigners are equated with rampant criminality, the breakdown of law and order, and unemployment (of European nationals) and an excess of foreigners. During the 1984 European elections, the FN used the slogan “Two million immigrants are the cause of two million French people out of work.”[12]

6) The sixth ethno-nationalist discourse identified was the idea that the EU causes the loss of national sovereignty because it leads to the ‘impotence’ of national parliaments, and undermines popular, democratic participation. The EU, here, is viewed as anti-democratic and contrary to the will of the dominant ethnic majority, as a threat to the existence of homogeneous nations and sovereign states, and as steps toward a universal, “totalitarian” world order in which equality and cultural sameness reign.[13]

7) The final element of radical right ethno-nationalist discourse is the tendency towards conspiracy theories, scapegoats, and ‘the politics of fear’[14] directed against ‘enemies’ whether internal (e.g., liberals, socialists, Muslims, Jews, Roma, etc.) or external (e.g., Zionists, the EU, the United States, capitalism, etc.). Ultimately, the radical right wants to make the boundaries of the state equivalent with those of the titular and dominant ethnic group,[15] as well as to cleanse the nation of these internal and external “enemies.”

For the radical right-wing parties, we can confidently posit that the true faith is not Christianity, but rather the ‘sacred’ nation and ethnic nationalism.[16] This ethnic nationalism favors ‘natives’ above foreigners in society and the state. It complains that the ‘true racism’ is the liberal state’s pro-immigration, pro-minority, and pro-multiculturalism regime, which ‘discriminates’ against ‘natives.’

The ethnic nationalist core of the radical right therefore raises three questions: Are they fascists? Are they populists? Or, are they the true democrats? While it is out of the scope of this article to suggest answers to all three, the ethno-nationalist core of radical right parties does pose a challenge to mainstream democrats of all political stripes. The radical right has brought issues to the forefront, particularly in relation to immigration, sovereignty, and national identity. How established parties of the left and the right respond will determine the amount of oxygen such ideas receive. Are we, as mainstream democrats, up to this challenge?

Professor Tamir Bar-On is a Senior Fellow at CARR, and Professor-Researcher in the School of Social Sciences and Government at Tec de Monterrey. See his profile here.

© Tamir Bar-On. Views expressed on this website are individual contributors’ and do not necessarily reflect that of the Centre for Analysis of the Radical Right (CARR). We are pleased to share previously unpublished materials with the community under creative commons license 4.0 (Attribution-NoDerivatives).

[1] The full name in Hungarian is Jobbik Magyarországért Mozgalom.

[6] This piece is adapted from Bar-On, Tamir. (2018): The Radical Right and Nationalism. In Rydgren, Jens. (ed.), The Oxford Handbook of the Radical Right. Oxford: Oxford University Press. For the piece and Rydgren’s Introduction, see https://books.google.com.mx/books?id=XD9FDwAAQBAJ&printsec=frontcover&source=gbs_ge_summary_r&cad=0#v=onepage&q&f=false