Social network analysis (SNA) is a data mining technique that is widely used to understand the relationships between users on contemporary social media. Online communities that are set up with a “follower/following” or “mutual friend” paradigm can be modeled as a social network, with each user as a node (or circle) in the network and their relationship as an edge (or line) connecting the circles. Some social networks like Twitter or Gab.ai are directional, where a user may follow someone but not be followed back. Other networks such as Facebook are undirected since both parties must confirm a friend relationship. The diagram below shows a sample undirected network with its nodes in red and edges in black. 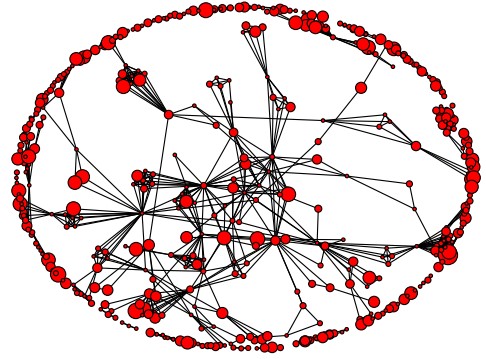 Using SNA to model a network reveals many interesting patterns in the structure of the network that would not be apparent otherwise. For example, SNA can reveal the most important nodes in the network – the ones to who everyone seems connected – or can reveal nodes that are entirely disconnected from the rest of the network. It can also reveal “bridges,” or the nodes that tie together otherwise-disconnected parts of the network. A rich body of research informs how scholars can use SNA to assess the importance of a particular node, how network diagrams can be visualized most effectively, how we can find areas of intense activity in the network, and so on.

Recently, I began to extend traditional SNA beyond modeling networks of individual users and into the modeling of radical right groups. How are radical right groups connected to one another by members in common? To tackle this problem, I used an SNA pattern I had previously applied to networks of software developers. In my prior work, I had modeled software projects as the nodes in the network, and the number of developers common to both projects became the edges. When visualised, projects that had more developers in common are shown closer together on the diagram, while projects that were less well-connected occupied the periphery. Using this technique, the (before) latent structure of the network becomes readily apparent: projects that did not seem related are revealed to be intertwined. Meanwhile, projects that “everyone” thinks are important are shown to be disconnected from the rest of the project ecosystem. The diagram below shows a tight cluster of interconnected projects and others that have fewer developers in common.

What would such a network of radical right groups look like? We can guess that groups might differ in size, but are there some that are particularly popular across ideological boundaries? Are there some groups or events that are surprisingly “central” to the network? To apply SNA to the radical right, I turned to a place where groups were well-defined, group membership was easy to determine, and data was plentiful and free: Facebook. Facebook groups are popular places to organize radical right activities, and (until April 4 2018, at least, when access to this data was removed) the Facebook API was a simple way to collect the necessary data.

Charlottesville and Group Membership Crossover in the Radical Right

In July, I will be presenting my findings about the group membership crossover for one particularly interesting event that was organized on Facebook: the Unite the Right rally held in Charlottesville, Virginia on August 12, 2017. SNA helps reveal that this rally did occupy an unexpectedly important position in the Facebook radical right landscape as a whole, and that the rally “punched above its weight class” in terms of how many disparate hate groups it tied together – especially for an event of its relatively small size. In future blog posts, I’ll outline several of the network metrics that are used to make this determination, and how SNA can be used to investigate crossover between entire ideologies as well as individual groups.

The amount of data available online about radical right groups is enormous, and data mining techniques such as SNA are critical to being able to analyze it effectively. Attempting to understand the interconnections between hate groups is a much easier job when we model the data as a social network. This technique can help us understand how some hate groups – like Unite the Right– can serve as a “bridge” between other groups or between entire ideologies.

Professor Megan Squire is a Senior Fellow at CARR, and a Professor of Computer Science at Elon University, North Carolina. See her profile here.

© Megan Squire. Views expressed on this website are individual contributors’ and do not necessarily reflect that of the Centre for Analysis of the Radical Right (CARR). We are pleased to share previously unpublished materials with the community under creative commons license 4.0 (Attribution-NoDerivatives).