In my first post for CARR, I pointed to the ideological character of radical-right views on the (protection of the) natural environment. Indeed, nature protection is in no way a stranger to the radical right, although the particularities and implications of their ecological vision differ in many aspects from mainstream and left-wing outlooks. A crucial claim of mine was, however, that things turn out to be different when looking at the issue of anthropogenic climate change. The latter constitutes one of the most serious threats to not simply the global climate, but to local spaces and landscapes – spaces and landscapes, such as the British countryside, charged with significant meaning in radical-right imaginaries. Yet, the radical right often appears to be climate-change sceptic, as suggested by the limited amount of research on its climate-change communication and anecdotal evidence. In the following, I will briefly suggest a few reasons for this ‘puzzle’.

Sometimes, scepticism towards climate change and/or its anthropogenic causes is banal, a knee-jerk reaction: as a supposedly ‘left-green thing’, (anthropogenic) climate change cannot be true. A world divided into good and bad leaves no room for subtleties; and yet, reasons and tropes underlying radical-right climate-change communication are often far more complex.

Contributing to this complexity is the fact that climate-change scepticism is no longer limited to (1) scepticism of its very existence or anthropogenic cause. For example, the British National Party (Fig. 1) and the United Kingdom Independence Party have articulated such straightforward scepticism especially forcefully, and the 2016 manifesto of the Alternative for Germany states that ‘Climate changes have occurred as long as the earth exists’ and it rejects the correlation between anthropogenic CO2emissions and climate change. However, today’s climate-change scepticism is usually subtler. As such, radical-right actors increasingly criticise (2) how knowledge comes into being (for example, they attack the Intergovernmental Panel on Climate Chance as being ‘politicised’) or (3) point to the supposedly detrimental consequences of climate-change policies (for example, carbon pricing is nothing more than a money-making scheme which, furthermore, benefits multinational corporations at the expense of small- and medium-size companies).[1]In some cases, such ‘secondary scepticism’ might be justified, though, more often than not, it simply facilitates polemic attacks and undermines the fight against anthropogenic climate change. 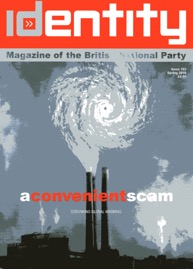 Underlying such climate-change communication are at least two ideological elements: first, the aforementioned undermining often arises from populist underpinnings of many contemporary radical-right actors. For example, defending ‘the general will’ of ‘the people’ might lead to accusations of ‘the elite’ lacking ‘common sense’ (along the lines of: ‘Can’t they see that if it is snowing in March, climate change cannot be happening?’). Mainstream findings on climate change might, similarly, be rejected due to their allegedly patronizing tendencies or to the harm done to ordinary people through green taxation. It is in this context that attacks against the media (‘fake news’), betraying ‘the people’, resurface. Often present in such arguments is the accusation that they are alarmist, dogmatic and persecute non-believers as heretics. Another trope, surprisingly far less prominent (for now!), is that of ‘climate refugees’, these being presented as yet another ploy by multiculturalists to destroy ‘the people’ and our‘right to difference’, or potentially constructed as a new type of ‘bogus asylum-seekers’.

Indeed, the idea that climate change is at least put in the service of (if not invented for) a ‘globalist agenda’ underpins much of the radical right’s climate-change communication. Here, a core ideological element, sovereignty, is, second, threatened by the actions of a liberal, global elite. Such a perspective might even slide into imagining conspiracies, arguing that climate change is yet another manufactured crisis to destroy our (cultural or ‘racial’) homogeneity and divert attention away from the alleged globalists’ stranglehold over the seats of power.

Yet, the situation is potentially more complex: debating climate change regularly involves debating the role of alternative energy sources (the most famous example being the German Energiewende [energy transformation]). These sources have the potential to appeal to the radical right as they can guarantee sovereignty – although they are regularly criticised. For example, wind turbines or biofuels are rejected for being linked to rising energy prices and ‘green’ taxes, thus supporting polemic attacks on ‘Greens’ and climate-change policies. A polemical tone is also present at times in radical-right criticisms of the impact of wind turbines on bird populations or in arguments pointing to the consequences biofuels have for rainforests – though these points can also be motivated by truly eco-friendly stances. Having said this, radical-right climate-change communication is indeed polyphonic, as especially those influenced by organicist thinking might well be motivated by a distinct, ecological (non-anthropogenic) vision of humans in their ecosystem. For them, the alleged materialism, the ideology of endless growth and the ‘globalist’ attitude of the mainstream and left are causing environmental crises, including global climate change. And while it might be that environmental issues demand international responses, these issues are, according to the radical right, due to present-day globalist structures.

So, why is it that climate change is often (though not unanimously!) viewed sceptically, even though the phenomenon seriously threatens both the specific territory that the radical right holds so dear and the very interdependence between humans and their natural environment? The reasons, I have argued, are at least partly ideological, i.e. connected to the radical right’s insistence on, for example, sovereignty and their juxtaposition of ‘the will’ of ‘the people’ and a ‘globalist’ elite. These elements might at times trump pro-ecology stances present in radical right ideology – or not, something which not only depends on the significance attached to the various ideological aspects, but also on contextual factors (e.g. diverging historical backgrounds as well as diverse discursive and political contexts). Thus, ultimately, it is the study of this complex interplay which will help to better understand the role of climate change within the radical right’s communication.

Dr. Bernhard Forchtner is a Senior Fellow at CARR, and a Lecturer in Media and Communication at the University of Leicester. See his profile at:

© Dr. Bernhard Forchtner. Views expressed on this website are individual contributors’ and do not necessarily reflect that of the Centre for Analysis of the Radical Right (CARR). We are pleased to share previously unpublished materials with the community under creative commons license 4.0 (Attribution-NoDerivatives).