The Economist recently published an article titled “European xenophobia reflects racial diversity, not asylum applications.” Despite the misleading title, the article actually purports to show that the ethnic and racial make-up of a country is strongly correlated with increases in pro-immigrant sentiment in Europe. It illustrates this using a scatterplot, where points represent the share of a country’s population with non-western ancestry in 2014 by the increase in average level of positive attitudes towards non-EU migrants before and after the so-called migration crisis. The line through this scatterplot is steep, suggesting a powerful association with serious real-world implications. Indeed, it implies that increasingly diverse societies will ultimately mean more tolerance for new diversity. Depending on your political persuasion, this is either a reason to celebrate or cause for alarm.

However, for scholars studying the relationships among diversity, anti-immigrant sentiment, and voting for the radical right, this article raised serious questions – most fundamentally whether this finding reflects reality. As discussed in a recent article for the Centre for Analysis of the Radical Right, the relationship between diversity and reactions to diversity, such as voting for a radical right party, is far from straightforward, making The Economist’s result somewhat of an outlier in a large body of research.

Almost immediately, we found reason to be skeptical of the The Economist’s claim. One of the variables – the share of a country’s population with non-western ancestry in 2014 – does not measure what the authors hope it measures. To create this variable the The Economist data team made creative use of the European Social Survey (ESS), a biennial cross-national survey of individuals across Europe. Based on how respondents answered questions about ancestry, they created measures of diversity for each country.

However, this is problematic for a number of reasons. First, countries that participate in ESS rely on random samples of populations 15 years and older. The ESS does not allow “quota sampling,” or oversampling of particular subpopulations to combat non-response or to ensure a specific demographic profile.

Second, because surveys are conducted using national languages, recent immigrants make up a very small proportion of respondents. Across the 8 rounds of the survey, the average proportion of respondents that are foreign-born is 9.5%. Of that group, over 50% immigrated over 20 years ago. Third, less than 6% of all ESS respondents identify as an ethnic minority in their country of residence. The Economist data team itself reported that experts cautioned against using ESS data to create country-level measures of racial and ethnic make-up, “due to small sample sizes for ethnic minorities in each country.”

There are other data sources available, fortunately. Eurostat, the statistical office of the European Union (EU), compiles and provides detailed information about the resident populations of all 28 EU member states and all 4 European Free Trade Association (EFTA) member states. In the table below, we identify the countries with the largest and smallest shares of foreign-born populations from countries outside the European Union that score low or medium on the United Nations’ Human Development Index (HDI). We also report statistics for the size of the non-EU population irrespective of country of origin HDI as well as the size of the foreign-born population regardless of country of origin. 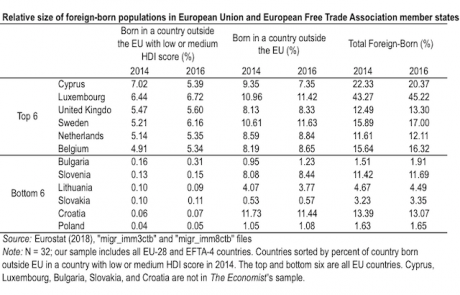 The differences between The Economist’s measure of diversity and actual population data are far from negligible. Based on their calculations, the authors report that less than 1% of Scandinavian countries have non-western ancestry. This is simply not true, and inconsistent with The Economist’s own reporting on immigration to Sweden and Denmark. Eurostat data shows that between 2014 and 2016, the non-EU population in Sweden was 11% of the population. The non-EU population from countries with low or medium HDI was 6%. In Demark, the averages for 2014 and 2016 are 7% non-EU and 3% non-EU from countries with low/medium HDI. In Norway, these statistics are 8% and 4% respectively.

In the article, the authors claim Scandinavia and Eastern European countries are similar in regards to diversity. As the table above makes clear, these regions are actually quite different. Further, the authors note that only 3.7% of German respondents self-identify as having “non-western” ancestry, however Eurostat data show that 7% of those residing in Germany were born in countries outside the EU. This figure does not even include the children of immigrants born in Germany, which means an estimation of 3.7% non-western ancestry is way off. While still an imperfect measure of overall racial and ethnic diversity, the Eurostat statistics on different sub-populations of immigrants provide a more accurate picture of the kind of diversity The Economist article attempted to capture.

Nevertheless, if The Economist captured a real relationship, we should be able to reproduce it using population data from Eurostat. In the scatterplots below, we show the relationship between these three measures of the foreign-born population in 2014 and the percentage of ESS respondents reporting support for immigration from “poorer countries outside of Europe” in 2014.

These are respondents who think their country should allow “many” or “some” immigrants (versus “a few” or “none”). Regardless of how we measure the size of the immigrant population, there is a positive correlation, buttressing The Economist’s claim that diversity is associated with more positive attitudes towards immigrants. However, bivariate regression analyses reveal that the only statistically significant relationship is the one between the relative size of the foreign-born population from non-EU, low/medium HDI countries and pro-immigration sentiment.

What if we look at the changes that occurred in countries between 2014-2016? After all, if diversity has a positive effect on support for immigration, then those countries that experienced an increase in diversity should also see an increase in positive attitudes towards immigration. The scatterplots below tell a different story. In each, there is a negative relationship between changes in attitudes about immigration and the change in proportions of immigrants in European countries. However, bivariate regression analyses show that none of these relationships is statistically significant.

What does this mean? First, the link between diversity and attitudes towards immigration is more nuanced than portrayed in The Economist’s article. While levels of immigration-generated diversity are positively correlated with pro-immigration attitudes, increases in diversity are correlated with a decrease in support. Second, and importantly, most of the relationships depicted here are statistically insignificant. If we had shown relationships using only 2016 data, however, we could have reported more significant results – but that only speaks to how tenuous this relationship is.

The complicated relationship between immigration and attitudes towards immigrants was the focus of a recent meta-analysis of 55 peer-reviewed articles. The authors of this meta-analysis, Yolande Pottie-Sherman and Rima Wilkes, find that the measure of immigration that most consistently explains attitudes towards immigration is perceived group size. In 70% of the models tested, subjective group size has a significant effect on prejudice. Meanwhile, in the vast majority of models, objective measures of diversity do not have a statistically significant effect on attitudes. Thus, perceptions of group size appear to matter more for attitudes about immigrants than actual group size. And, other research shows that these perceptions are not always accurate: Europeans tend to overestimate the size of the immigrant population in their countries.

Immigration and subsequent diversity are arguably the most salient political issues across western democracies. Thus, it is important that strong claims about the impact of immigrant groups in particular countries or cross-national trends are supported by data. The way we understand the world has implications for individual behaviors, intergroup relations, and even policy outcomes.

To better understand pro- or anti-immigrant attitudes, or any phenomenon for that matter, we must use data sources and methods that help us describe and explain reality as accurately as possible. Further, to get a complete picture, we should never rely on one study, one correlation, or one scatterplot. Nuance may be less exciting or, in the age of social media, less “clickable,” but it is much more consistent with the complexities of our social world. Given the political salience of immigration and how affected we are by our own perceptions of immigration, it is critical that we get the details right.

Dr. Maureen Eger is a Senior Fellow at CARR, and a Research Fellow in the Department of Sociology at Umeå University in Sweden. See her profile here.

Contributing Author: Jeffrey Mitchell is a Ph.D. student in the Department of Sociology at Umeå University in Sweden.

© Maureen Eger and Jeffrey Mitchell. Views expressed on this website are individual contributors and do not necessarily reflect that of the Centre for Analysis of the Radical Right (CARR). We are pleased to share previously unpublished materials with the community under creative commons license 4.0 (Attribution-NoDerivatives).