On the morning of 14 August 2018, a vehicle struck cyclists and pedestrians during rush hour in London before crashing into security barriers outside the Houses of Parliament. The seemingly deliberate use of a vehicle as a weapon brought to mind similar events that have been making headlines around the world. Last year Khalid Masood killed 5 and injured 50 more in the same area, using much the same modus operandi. As is often the case when pedestrians appear to be deliberately targeted by vehicles, pundits, broadcasters, and even the President of the United States began to prematurely ascribe meaning, responsibilities, and motives to the incident, attributing this – like the Westminster attack on 22 March 2017 – to the directives of the Islamic State. 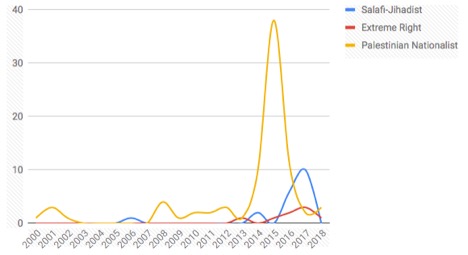 Whilst the existence of contagion – whereby violence-prone individuals imitate forms of political violence attractive to them, based on examples usually popularised by mass medi – has been closely studied, the mechanisms surrounding the spread of a new technique from one movement to another has not been well examined. In his study of self-immolation, Michael Biggs argues that perceived legitimacy – referring to the sense of whether a technique is just and right from the perspective of those who are going to employ it – is a determining factor as to whether a given technique will spread from the repertoire of contention from one group to another.

Whilst scholars, law-enforcement, and counter-terrorism practitioners have devoted a considerable amount of attention to examining how vehicle ramming is encouraged and framed amongst Jihadi-Salafist propaganda such as Dabiq and Inspire magazines, the discourse surrounding vehicle ramming within the far-right ecosphere has remain relatively ignored.

Even before last year’s Unite the Right rally in Charlottesville on 12 August 2017, where a self-identified white supremacist allegedly rammed his car into a crowd of counter-protesters, killing Heather Heyer and injuring 19 others, vehicle ramming attacks had long been publicised by the extreme right through the use of popular memes. These calls to deliberately strike protesters with vehicles became particularly prevalent as blocking roadways and highways became a central tactic of Black Lives Matter activists. ‘Run Them Over’ memes spread through comments sections on YouTube videos, blog posts, and news stories depicting confrontation between frustrated drivers and counter-protesters in the run-up to Charlottesville. In 2016, an Oregon police  officer was fired after he posted a photo of a Black Lives Matter (BLM) protest alongside with the caption, ‘When encountering such mobs remember, there are 3 pedals […] Push the right one all the way down’. Likewise, a police sergeant in Minnesota was suspended after posting a comment on an article about a Martin Luther King Jr. Day march, instructing drivers to ‘Run them over. Keep traffic flowing and don’t slow down for any of these idiots who try and block the street.’ Fox News host Tucker Carlson’s former website, the Daily Caller, also posted a video compilation of ‘cars plowing through protesters’, instructing readers to ‘Study the technique’ as ‘it may prove useful in the next four years’. The video, which was also available on Fox News’ Fox Nation website, gathered more than 20,000 views before being removed in the wake of Charlottesville.

The apparent fixation with the idea of mowing down protesters in the street has trickled down to state bodies with Republican legislators in six states – Florida, North Carolina, North Dakota, Rhode Island, Tennessee, and Texas – which have attempted to enact protections for drivers who unintentionally hit protesters. This codifies the idea that protesters surrender their rights when they obstruct traffic, thereby legitimising this kind of use of force. Although these state bills failed to be enacted, partly as a result of public indignation after Charlottesville, the ‘Run Them Over’ trope continues, despite the death of Heather Heyer last year, with clusters of YouTube videos and memes encouraging or celebrating the ramming of protesters. Three weeks after the murder of Heather Heyer, an unnamed emergency services employee of the Chelan County Sheriff’s Office posted a meme featuring a drawing of three people being run over by a car under the words ‘All Lives Splatter’. Beneath the picture are the words, ‘Nobody cares about your protest / Keep your ass out of the road’. 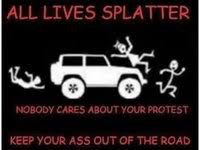 Whilst considerable attention has been devoted to analysing jihadi-Salafist groups propaganda calling for leaderless resistance (such as the use of vehicle ramming attacks), inquiries into how the radical right activists understand, frame, and legitimises the use of vehicles as a means of silencing opponents and adversaries remains particularly superficial. The radical right may have learned the technique from jihadi-Salafist attacks in Europe – on at least three occasions such attacks by the radical right were perpetrated as putative revenge for jihadi-Salafist attacks – but an intellectual debt is due to the drivers who have plowed through BLM protesters, memes that legitimises such actions, and legislators who attempted to make such behaviour a defensible course of conduct in the face of political disagreements.

Dr. Yannick David Veilleux-Lepage is a Senior Fellow at CARR, and a Senior Research Associate for the Transcultural Conflict and Violence Initiative at Georgia State University. See his profile here.

© Yannick David Veilleux-Lepage. Views expressed on this website are individual contributors and do not necessarily reflect that of the Centre for Analysis of the Radical Right (CARR). We are pleased to share previously unpublished materials with the community under creative commons license 4.0 (Attribution-NoDerivatives).