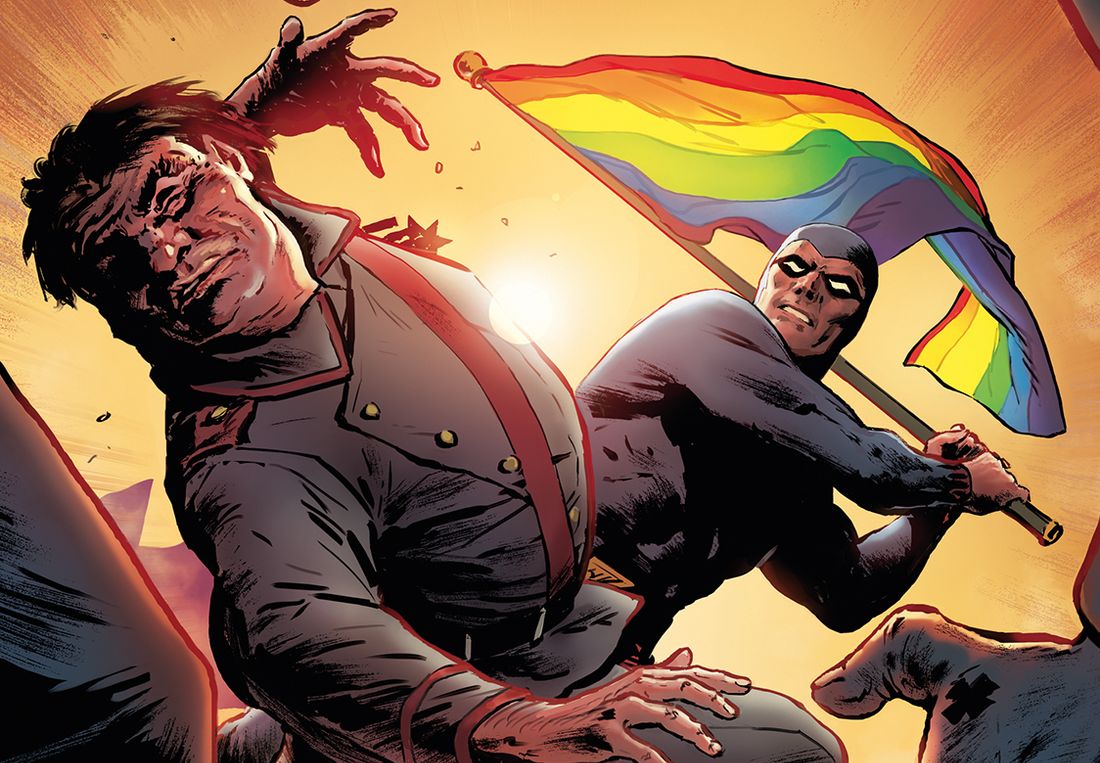 He punched a Polish nationalist with a rainbow-coloured Pride-flag. When superhero The Phantom(‘Fantomen’) in a recent Swedish episode of his comic-adventures (“The Golden Eagle”, 9:2018) made a bold statement against the European radical right and its ideological positions, the makers were accused of disseminating ‘left-wing extremist ideas’. Social media activism temporarily boiled over, lamenting that The Phantomhad turned into ‘yet a victim of the cultural left in order to politicize everything in the life of media’. This could have remained one of many typical incidents, representative for the divisive nature of political debate ahead of the parliamentary elections in Sweden on September 9. However, when representatives of the right-wing populist party ‘Sweden Democrats’ (Sverigedemokraterna) in late August successfully demanded a Pride-flag to be removed from a polling station in a municipal library, it became evident that the Pride-flag has become a real battlefield for the radical right.

LGBTQ+ and the Radical Right: A Means to an End?

The global radical right is divided over the issue of LGBTQ+ and its public manifestations. Whereas a majority rejects self-defined varieties of sexual identity as a perversion of a presumed ‘natural order’, others have developed ‘femo-‘or ‘homo-nationalist’ positions. As Jasbir K. Puar argued already in his 2007 Terrorist Assemblages: Homonationalism in Queer Times and further expounded upon in this CARR article, there is a tendency in right-wing groups to utilize support for sexual diversity and LGBTQ+ rights in order to attack the cultural other, particularly Islam, as inferior to ‘Western values’ of tolerance. Sara Farris develops this argument in her book In the Name of Women’s Rights: the Rise of Femonationalism(2017). In it she examines how women’s rights are invoked in order to stigmatize Muslim men and Islam as a religion for not being feminist.

Both mechanisms are at play in the Swedish debate. The Sweden Democrats for instance organized Pride-parades in the suburbs of Stockholm (‘Pride Järva’ in 2015 and 1016) in order to convey exactly this message: intolerance against LGBTQ+ is a constitutive feature of Swedish ‘no-go-zones’ in which Muslims make out the majority of the population. The message they try to convey is clear: the radical right is the only credible support for the rights of sexual minorities. Radical right opinion-maker, Ann Heberlein (candidate for the conservative party Moderaterna and even traded as Minister of Culture ahead of the elections), also habitually plays femo-nationalist cards. In her book ‘Rape and Culture: an examination on the relationship between immigration and sexual crime’, she develops the position that violence against women and rape are culturally determined. So she says, Muslim men from Northern Africa are over-represented in crime statistics and pose the largest threat against the independence of (ethnically) Swedish women. The newly formed party MED (Medborgerlig Samling), which operates on the fringes between Moderaternaand the Sweden Democrats has made support for LGBTQ+ rights a major position. It’s (openly homosexual) party leader Ilan Sadé was banned to participate officially in the 2018 Stockholm EuroPride event because of MED’s diffuse (namely radical right) political positions. This sparked a predictable outcry among the party’s extremist supporters like cultural icon Alexander Bard who on Twitter demanded “It is time to #burnthereinbowflag!” or pro-Putinist author Katarina Janouch who famously claimed in Czech media that Swedes are flocking to take shooting licenses ahead of the forthcoming civil war caused by mass immigration.

The Episode in Question: Phantom & the Golden Eagle

However, support for feminism and LGBTQ+ rights appears only to attract a minority of the Swedish radical right. Therefore, it is time to turn back to “The Golden Eagle” and in short to unpack its apparently provocative message. Visiting a friend at a Carpatian castle, The Phantom makes acquaintance with a Romanian hobby archaeologist, Popescu, who excavates a coffin of a Teutonic knight. Dating back to the Battle of Grunwald (1410), the coffin contains a letter and a golden eagle. The eagle is said to have been stolen from the Polish king. The next day, The Phantom finds out that Popescu has been killed and the eagle has disappeared. While waiting at the airport for his returning flight, The Phantomwatches a press conference of the ‘Party of Truth and Order’ in which its party leader Grabinski announces the return of a national symbol (the eagle), “rescued from foreign agents”. A few nights later, The Phantomchallenges Grabinski about the murder of Popescu who defends his actions – according to him: “The strength of a nation is built on its history and if we can remember people of their history, we can give them a future.” The Phantomalso involuntarily encounters the chief ideologue of the party, Nowakowski, who points at the inspiration of national symbols and moreover develops an ideological explanation, worth to be quoted extensively:

“Our youth reject the false values of European integration and the tolerance of liberal evil towards homosexuals and other deviators. Atheists! Muslims and Jews! The federal communism of Brussels! The eagle symbolizes our struggle to liberate us from our more powerful neighbors. Its return gives us power. And during the barbarian pride parade tomorrow we will display this might!”

The Phantomescapes from Nowakowski’s estate where he was held and observes the following day how Grabinski incites his followers against the Pride parade: “Noble Polish youth! My heart is filled with joy to see you here. Each of you symbolize the virtues of our nation: honor, decency and traditional family values. Different from the pack that dances and shows off along Marzalkowska street.” The superhero tries in vain to calm down the supporters of ‘Truth and Order’ and demands Grabinski to stop the assault against the parade. He punches the party leader with a Pride-flag and later on throws it after him, hitting him in the crotch.

Analysis: What does this episode say about the European radical right?

Being integrated into a superhero comic more as a side-story (the main plot concerning the golden eagle has otherwise many features of a typical The Phantom-adventure), this encounter with the Polish nationalists still captures in essence a large number of representative elements of the contemporary radical right:

In sum, the radical rights attacks against this episode of The Phantomidentified the superhero’s support for the Pride-parade as a trigger for hyper-medial net activism, trying to make blunt political points. Within the charged atmosphere of Swedish political debate ahead of the national elections, a simple comic episode can serve as a lens through which these tensions can be observed. The episode of The Phantomhad all prerequisites to enter the virtual world of radical right meaning-making and its digital highways of dissemination. Breitbart News picked up the story and referencedto Polish media mocking the episode. From there it took only one day to migrate to The Daily Stormer, where The Phantomwas likened with ‘Captain Sweden’ – a hoax superhero in the meme-world of the radical right who in reality betrays his country. Thus, ‘The Golden Eagle’ expressed a number of trigger-issues that could capitalized upon, such as the image of ‘mainstream media’ and its ‘political correctness’ paired with the attacks against (Polish) nationalism and open support for LGBTQ+ rights, all favorite topics in the identity politics of the radical right as we go into next week’s Swedish elections on September 9.

Dr. Andreas Önnerfors is a Senior Fellow at CARR, and Associate Professor in History of Ideas at the University of Gothenburg. See his profile here.

© Andreas Önnerfors. Views expressed on this website are individual contributors’ and do not necessarily reflect that of the Centre for Analysis of the Radical Right (CARR). We are pleased to share previously unpublished materials with the community under creative commons license 4.0 (Attribution-NoDerivatives).

Image by Henrik Sahlström with courtesy to https://www.aftonbladet.se/nyheter/a/RxBARa/har-slar-fantomen-polska-nationalister-med-prideflaggan, 25 April 2018.

Weronika Pérez Borjas, ”Rainbows and Racism Marched Together in Sweden During LGBT Pride Week” in