Chemnitz shows how collaboration across three right-wing sectors is a recipe for disaster, as the extreme right understands very well.

Haunting video footage of groups of German right-wing extremists chasing, harassing and attacking ethnic minorities, journalists and counter-protesters circulated widely on social media last week, along with footage of overwhelmed police. “If the mob attacks,” a policeman warns a Lebanese refugee counter-protester in one video, “we can’t guarantee your safety.”

Protests had developed rapidly in the east German town of Chemnitz last Sunday, after a German man died in a street fight stabbing and two Syrian and Iraqi asylum seekers were arrested for the crime. What was originally a spontaneous crowd protesting ‘criminal migrants’ grew overnight—largely through social media recruiting—to 6,000 protesters. Far outnumbered, local police struggled to hold the line, and swaths of the city fell out of police control for two days, until police reinforcements arrived.

The Chemnitz events horrified mainstream Germans and citizens across the globe, but they also brought the new face of far right extremism into sharp relief. More than ever, it is now clear that the tactics and strategies of extreme right-wing violent movements have changed.

Before Chemnitz, there were two types of right-wing street protests in Germany that operated separately. For decades, a small number of hard-core, militant neo-Nazi marches have taken place periodically, typically to commemorate Nazi leaders like Rudolf Hesse and attended by fringe extremists. Anti-fascist counter-protesters almost always far outnumbered right-wing extremists at such events, and violence was typically limited to clashes between left and right. Since 2015, a series of separate, larger right-wing, anti-Islam marches throughout Germany and Europe have been led by the PEGIDA (Patriotic Europeans Against the Islamization of the West) movement, bringing tens of thousands of ordinary citizens to the street in non-violent marches.

The Chemnitz protests rapidly mobilized these two separate groups and more, showing a new level of cooperation across militant neo-Nazis, right-wing hooligans, newer subcultural groups like extreme right-wing martial arts fighters, and the thousands of ordinary, angry citizens (Wutbürger) who had been mobilized through movements like PEGIDA. A third sector of the extreme right-wing—the leaders of right-wing political parties like the Alternative for Germany (AfD, now the third largest party in federal parliament)—and local elites added fuel to the fire by celebrating the Chemnitz protesters as revolutionaries, framing the riots as justifiable resistance that signaled the beginning of the end of a corrupt state. Extreme right-wing leaders even compared the riots to the youth- and citizen-led democratic protests of 1968 and 1989. This rhetoric further empowered ordinary citizens and legitimized the violence.

While there have been previous attempts to bridge these varied far right sectors—most notably in the 1990s during a similar wave of riots in Rostock and elsewhere, and through the right-wing extreme National Party of Germany (NPD)’s efforts—for the most part, each group dismissed the other. Far right parties and citizens were too establishment for the militants, the neo-Nazis too violent for ordinary citizens and elites. The success of the Chemnitz collaboration—with militant extreme right, ordinary citizens and far right political elites marching together—illustrates a new cycle, in which street movements like PEGIDA become a breeding ground for radicalization, and vigilante violence is legitimized by elites. In this context, last Sunday’s stabbing death was exploited as an opportunity for the extreme right to mobilize further—an ignition event for what is called “hive terrorism”—the mixing of ordinary citizens with hard core violent extremists, either in spontaneous bursts of violence or in planned attacks.

What should Germany do next? In the short term, there is a clear need for better assessment and planning by police and intelligence authorities. The failure to predict the scale of the protests or their potential for violence highlights how critical it is for the state to develop better predictive intelligence and a broader understanding of how ignition events—especially when amplified through social media—can rapidly mobilize large numbers of people.

In the longer term, Germany has to reckon with the fact that its decades of work to ensure a strong democratic culture is being challenged by a triple threat: entrenched xenophobia and disenfranchisement among ordinary citizens, the expansion of far right subcultural scenes and militant extremist violence, and elites whose political rhetoric demonizes migrants, declares the media the ‘enemy of the people,’ and celebrates violence as resistance and revolution. Any strategy to address the extreme right has to consider all three domains.

Above all else, Chemnitz shows how collaboration across these three sectors is a recipe for disaster. The question in the months to come will be whether this new coalition between right-wing parties (AfD), street protest movements (PEGIDA) and neo-Nazis will be able to sustain itself, or if it will follow the previous path of dissolution through internal dispute, like previous attempts to “Unite the Right” in Germany and elsewhere. 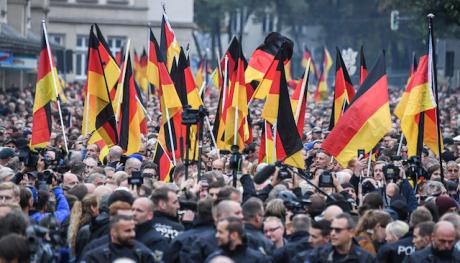 Professor Cynthia Miller-Idriss is Head of Outreach at CARR, and Professor of Education and Sociology at the American University. See her profile here.

© Cynthia Miller-Idriss & Daniel Koehler. Views expressed on this website are individual contributors and do not necessarily reflect that of the Centre for Analysis of the Radical Right (CARR). We are pleased to share previously unpublished materials with the community under creative commons license 4.0 (Attribution-NoDerivatives).

This post was also hosted by our partner organisation, Open Democracy, here. This article was first published in French in Le Monde on September 6, 2018.