The 2015-2018 European refugee crisis has provided significant challenges to mainstream centre left parties, as well as the governance of the European Union (EU). As a result, the salience of immigration as a political issue has skyrocketed to prominence and remained high in the public domain. This has created distinct electoral opportunities for the populist radical right to ramp up the immigration issue and capture disaffected voters.

In line with previous research, we argue that centre right parties recognise this crisis as an opportune moment for far-right parties to make electoral gains and respond by adopting hard-line positions on immigration. This strategic positioning is done to minimise voter losses.

We constructed an original aggregate level elections database on parties’ electoral performance in national parliamentary (legislative) elections across Europe and merge it with the Chapel Hill Expert Survey (CHES) dataset on party positions. The resulting dataset contains 223 parties across 28 EU member states over the period of 2015-2018.

Our regression analysis is then complemented with a qualitative case study analysis (below in Table 1) provides a breakdown of the key cases in our analysis), which result in three important patterns. 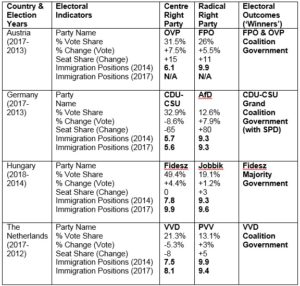 First, the case of Austria (2017) show that centre right parties (the incumbent ÖVP) adopted more ‘restrictive’ positions on immigration and helped them electorally. At the same time, the centre right ÖVP and radical right FPÖ formed a coalition government after the 2017 legislative election. This provided a repeat of the 1999 ÖVP-FPÖ coalition government. The case of the Netherlands (2017) election provides a more nuanced picture. Though the incumbent centre right VVD adopted tougher stances on immigration, VVD saw their vote share decrease and the radical right PVV under Geert Wilders increasing their vote share. Although the centre right VVD performed electorally worse, they still managed to form a coalition government after the election and demonstrates that adopting tougher positions on immigration may have mitigated further electoral losses to PVV. Thus, it is conceivable that by adopting more ‘restrictive’ positions on immigration, the centre right in both countries have arguably been able to mitigate the electoral threat that the radical right poses in national parliamentary elections.

From the German case, the second key pattern shows that when centre right parties (CDU-CSU coalition) do not adopt hard-line stances on immigration, they lose out electorally to the radical right (AfD). The German 2017 Federal election is a key case as it shows (a) the high salience of the immigration issue, (b) the importance of the refugee crisis and (c) arguably how Chancellor Merkel’s CDU-CSU coalition was not trusted by voters to handle this electoral issue.

Finally, the third important pattern is one that paints a bleaker picture for the future of European politics, particularly in the context of Central-Eastern Europe. In Hungary, a first reading of this election appears to show that the incumbent centre right party Fidesz performed better electorally and outperformed the radical right Jobbik. To have such a reading of this election is misleading though. The argument can be made that the refugee crisis in Hungary has led the Fidesz Party under PM Viktor Orbán to ramp up the intensity of the immigration issue, not only to counteract the threat of the radical right Jobbik, but also to further weaken the mainstream centre left parties in Hungary.

Thus, the answer may be simply that the rationale for incumbent centre right parties to do so is one of political survival. A ‘strategy’ such as strategic positioning may ensure that the centre right can remain in power as a governing party despite an opportune moment for challenger parties from the far right to seek to increase their own electoral fortunes. Therefore, we argue that incumbent centre right parties are electorally resilient and ‘play the immigration card’ in order to outmanoeuvre the radical right on this issue during the refugee crisis period.

However, by shifting further right on immigration, centre right parties may have opened up a ‘Pandora’s box’ and brought the ideology of the far-right into the political mainstream. Thus, we argue that a paradox may have taken place in twenty-first century European party politics. This strategy may benefit the centre right in the short-term, but conceivably aid the radical right more in the long-term.

Dr James F. Downes is a Senior Fellow at CARR and Lecturer in Comparative Politics in the Department of Government and Public Administration at the Chinese University of Hong Kong. His profile can be found here.

Co-Author: Matthew Loveless is a Jean Monnet Fellow at the European University Institute. He is also a Co-Director and Senior Research Fellow at the Center for Research and Social Progress.

This post is based on a working paper by the authors, titled: “Strategic Positioning: Right-Wing Party Competition over Immigration during the 2015-2018 European Refugee Crisis.” The paper builds on the authors’ recent publication in the journal Electoral Studies.