This article is the third in a series on using social network analysis to explain the structure of extremist online communities and events. The paper that this article is based on will be presented at the 10th International Social Informatics Conference on September 26, 2018.

Back in 2017 I began collecting and analyzing social media data in order to understand the Unite the Right event being planned for Charlottesville, Virginia in August. I was surprised by the high numbers of extremists from a broad cross-section of ideological backgrounds using Facebook to plan this very public event. As I studied my Facebook data in particular, I was also surprised by how many of the white power, militia, and neo-Confederate groups loudly and publicly professed extremely negative views towards Muslims. The level of vitriol and open hostility directed at Islam and Muslims on Facebook was very shocking for a platform claiming it was “no place for hate.” Where was this anger coming from and which groups were fueling it?

To understand this anti-Muslim ecosystem growing on the network, I used Facebook’s own public API to collect group membership rosters for a cross-section of groups espousing nativist and racist ideologies. Table 1 shows how many Facebook groups and accounts I found in five of the largest extremist ideologies: anti-Muslim, anti-immigrant, neo-Confederate, anti-government “Patriot” militias, and the white nationalist / “white power”.

Right away, I noticed some interesting patterns. Even though I was only able to identify 136 anti-Muslim groups and 51 anti-immigrant groups, these “nativist” groups tended to be larger than the other ideologies, averaging over a thousand people in each group.

Anti-immigrant and anti-Muslim ideologies have the largest average group size.

Next, I wondered whether people crossed over between a number of ideologies, or whether they were more likely to just stick with groups of a single, preferred type. By comparing the individual users across the group membership rosters, and counting the number of users who appear in more than one group, I was able to determine rates of both group crossover and ideological crossover.

Table 2 shows that 81% of neo-Confederate adherents are only in other neo-Confederate groups – only 19% will branch out to other ideologies. On the other end of the spectrum, 39% of white power adherents will join at least one group belonging to  another ideology. (Prior work shows that many white power users chose to crossover into Alt-Right and Neo-Nazi Facebook groups, in addition to the five ideologies in this study.)

Table 2. How many members of each ideology grouping are in any other?

Next, I calculated how many users were shared in common between every pair of groups in those five ideologies. Table 3 shows every aggregated ideological pairing. It is not surprising that the two ideologies that share the most members in common are anti-immigrant and anti-Muslim, two nativist ideologies. And while anti-government “Patriot” militias frequently claim that they are not racist, my data shows that fully a quarter (26%) of the white nationalist/white power Facebook group members are also members of at least one anti-government “militia” group.

Perhaps most significantly, Table 3 also shows that anti-Muslim groups were the first or second most popular crossover category for all of the other ideologies. The data shows that if Facebook extremists are looking to branch out from neo-Confederate, anti-government, anti-immigrant, and white nationalist silos, then anti-Muslim groups are the primary or secondary choice.

Table 3. Counts of shared members between groups in every ideological category

Finding important nodes in the network

So which groups are acting as “bridges” between these ideologies? Is it just one or two groups driving most of that crossover? If so, which ones?

To help answer this, I generated a social network diagram to reveal the structure of the network. The circular nodes in Figure 1 represent individual Facebook groups in these five ideological categories. (To make sure that the diagram was readable, I only included the groups that shared at least 10 members in common with at least one other group, giving the final diagram 893 nodes.)

I then applied an algorithm that places nodes closer together based on the more members they share in common, and closer to the center of the diagram if they connect to a lot of other nodes. Finally, I sized the nodes according to how many people were in that particular Facebook group, and added colors to indicate the primary ideology.

The diagram helps to reveal patterns that would be difficult to find with just numbers. For example, the diagram shows how closely intertwined the green (anti-Muslim) and pink (anti-immigrant) groups are. The diagram reveals that even though Table 3 showed us that 61% of anti-immigrant users would join at least one anti-Muslim group, there is still a lot of variability in which anti-Muslim groups they are joining, and they may be joining more than one.

Figure 1. The network of shared membership between Facebook groups from five extremist ideologies 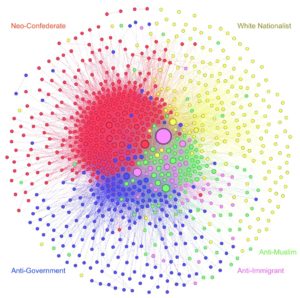 Which groups are serving as the most important “bridges” between the various ideological categories? One way to determine this is to measure the influence of a node based on its betweenness centrality. To calculate betweenness, we keep track of the “shortest path” we could take between every node to every other node on the diagram. Then we look for the nodes that have the highest number of “shortest paths” going through them. Betweenness reveals not just the most popular or largest nodes, but also shows which nodes are tying together far-flung parts of the network. Betweenness can also show which nodes – if removed – could sever the network in important ways.

Figure 2 shows some of the groups with high betweenness scores. These groups occupy important positions as conduits from one group into another, and from one ideology into another.

Figure 2. Detail showing some of the groups with high “betweenness” scores. 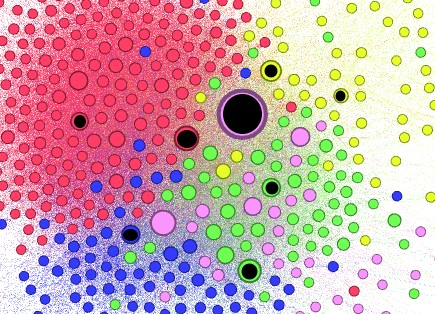 “Betweenness” is one way to measure how important a node is to the overall structure of the network.

What happens to the network if the high-betweenness nodes are removed? The original network shown in Figures 1 and 2 had only seven distinct neighborhoods (“connected components”). As an experiment, I removed just eight of the highest scoring nodes, and the number of distinct neighborhoods rose to 26. Interestingly, among the newly distinct neighborhoods includes one KKK group and four groups of Aryan Brotherhood of Texas “Peckerwoods”, a white supremacist gang. More research needs to be done into how social network analysis can identify social media “hot spots” where the most dangerous inter-group and inter-ideological membership crossover is happening.

At this point in time, Facebook has begun to admit that it is having trouble policing hate on its platform. Multiple reports have documented that Facebook seems unable to effectively control violent, anti-Muslim rhetoric in the network. It might make sense to use social network analysis techniques to identify problem areas in the network. The longer Facebook waits to develop an effective strategy for identifying the people and groups who are the root cause of the hate on their platform, the more hate will persist in the network. And allowing hate to fester puts every user at risk.

© Megan Squire. Views expressed on this website are individual contributors and do not necessarily reflect that of the Centre for Analysis of the Radical Right (CARR). We are pleased to share previously unpublished materials with the community under creative commons license 4.0 (Attribution-NoDerivatives).