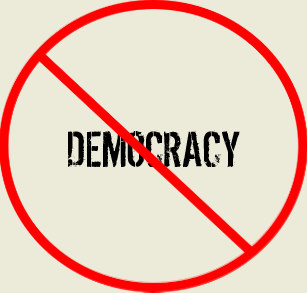 As Ronald Bush has pointed out, accounts of the ‘ideological alignment between the oppositional practices of imagism, “anti-democratic” forms of “individualism,” and anarchism’, may ‘[miss] a beat… by not considering the similarly “anti-democratic” features of John Stuart Mill’s antecedent liberalism.’[1] Treatments of modernist ideology may indeed underplay this inheritance, not only from Mill’s On Liberty (1859), but other key statements including De Tocqueville’s Democracy in America (1835) and Madison, Hamilton and Jay’s Federalist Papers (1788). One also thinks of fin de siècle studies of ‘crowd psychology’, a discipline pioneered by French intellectuals seeking to explain their country’s turmoil in the 19th century.

In recent months, populist voices behind Brexit and the Trump victory have attacked ‘liberal metropolitan elites’ as ‘anti-democratic’. The rule of law has been challenged by Trump’s tweets, while the Daily Mail attacks high court judges as ‘the enemy of the people’. The liberal media, taken by surprise on either side of the Atlantic, speculate whether the checks and balances carefully built into the American Constitution will hold. Is there anything to be gained in now reconsidering modernists’ ambivalence towards mass politics? Problematically their attitudes were often expressed with a crudely Nietzschean rhetoric, seemingly inclined towards fascism.  This has been said often and persuasively. But do the most relentless critiques of modernist elitism – for example, John Carey’s Intellectuals and the Masses (1992) – fully register the liberal roots of anti-populism? Isn’t some degree of horror at the masses actually reasonable, especially if one imagines what it is to be their victim? It is perhaps timely to think of Burke’s recoil at the violence of the French Revolution, and Carlyle’s imagining of the resulting regicide, through to British observers’ alarm at  the feverish atmosphere of the Nuremberg rallies. But perhaps the real horror at these events, particularly the latter, derives from a sense of people being controlled by knowing orchestrators of destruction – a new elite who ironically decry the rationalism of ‘experts’ and call for progressive leaders to be assassinated or imprisoned.

The interaction of masses and elites is not simply oppositional, as Taine shows in his Origines de la France contemporaine vol IV, a book with a key influence on Gustave Le Bon’s The Crowd. Taine’s account of the French Revolution is interesting here in its psychological analysis of how an idee fixé, an intellectual concept, becomes an icon around which the crowd marshals itself. There is a dangerous dynamic between an ideological, vocal leader, and the massed crowds who follow. Taine was thinking of the Jacobin leaders, but a later classic example is Charles Maurras, leader of the French neo-royalist group Action française who, having promoted the superiority of an indigenous French ‘classicism’ at odds with the disease of ‘foreign’ romanticism, maintained an intellectual aloofness while his young followers rampaged through the university district of Paris, assaulting leading liberals, socialists, and – significantly – prominent Jews. The intellectuals are not so far removed from the masses: it has been intellectuals who have licenced the masses’ worst excesses. Look at Mussolini, the progenitor of fascism: someone who considered himself an intellectual, who wrote for the equivalent of modernist ‘little magazines’ and prided himself on philosophical pretentions, at least in the early stages of his political career.

Taine argues that as a certain kind of elite and a certain mood in the masses come together, an idée fixe can be harnessed to the masses and overwhelm rational government. Simple images, simple ideas, become the hooks upon which to hang a fierce anger.  Gustave Le Bon elaborated this theory in detail in The Crowd (1895), drawing both on Taine and on Henri Bergson, who was in turn indebted to Taine in his view of consciousness as divided between conceptual surfaces and irrational depths. There is far more to say about Bergson than can be done justice here, but I will return briefly to his modern counterparts.

Modernist writers, not least the Imagists, responded to these devices in their aesthetics, sometimes subverting, sometimes appropriating the methods of the new mass politics. This ambivalence resists simple categorisation: modernist writers were not always innocent of emulating fascist techniques – but the redeeming feature of a certain network of modernist ‘conservatives’ may be in their distaste for such a crude wielding of power, and in their determination to separate and distinguish themselves from what was quickly evolving towards fascism.

Regarding the question of ‘salvaging’ aspects of modernist politics, Christos Hadjiyiannis humorously entitled for his review of Matthew Feldman’s book Ezra Pound and Fascist Propaganda: ‘We Need To Talk About Ezra’,[2] recalling Lionel Shriver’s We Need to Talk about Kevin, a chronicle of a juvenile psychopath’s career, written from his mother’s perspective. Indeed, the agonised scholar, like a wishful-thinking prison visitor, seeks signs of rehabilitation in the hardest of cases – who is also one of the family, one of the canon. The cult of personality creates a state of denial among literary admirers of Ezra Pound.  For example, Poundian conferences in Italy are reportedly sometimes haunted by men in black shirts, the Casa Pound, an active neo-fascist organisation. Pound and other modernist fascists can be dismissed as cranks: their utterances are esoteric, aestheticised, often ludicrous; at worst, sinister. We might forgive an individual as changeable, misguided, or deluded, but can we accept the work when an intellectual contamination is so conspicuous? Yet their vision remains persuasive in parts. A case in point is Pound’s Neoplatonic vision of beauty, going back to those translucent, liberatory images of his earliest experiments- ‘The apparition of these faces in the crowd; / petals on a wet, black bough’: a comment itself on his wish to cherish individuality in an age of mass anonymity. Can we salvage the vision – or at least some aspect of it, some angle?

Perhaps a more suitable metaphor to rehabilitation is organ donation: a unique combination of ideas has come to its end, but something might be recoverable – not so much Shriver’s ‘Kevin’ as the Adverts’ ‘Gary Gilmore’s Eyes’. More seriously, perhaps we can see ideologies as clusters of ideas, separable and adaptable. This is the method of the political philosopher Michael Freeden: ‘ideological disaggregation’. Hulme (to illustrate Georges Sorel’s similar method of ‘diremption’), uses the metaphor of extracting an embedded knot of ideas from the mind as if removing a tumour. We can distinguish the ideas we wish to preserve and which we wish to discard in this way – keeping the resistance to an atomising liberalism; rejecting the erosion of personal freedom in an over-regimented Tory or Guild system. Yet another metaphor is culinary (if you’ll permit me) – the Japanese puffer fish, known as fogu, is deadly to humans unless cooked with great care by expert chefs. Liberal scholars are adept at cooking intellectual fogu, cutting the poison out and leaving behind a delicacy.

Hadjiyiannis finds a similar way of looking at ideology in the methodology of Ernest Laclau and Chantal Mouffe. In his 2018 book Conservative Modernists, citing Anna Marie Smith, he suggests that ideologies might be ‘understood as a discourse constituted through articulation, as part of a process during which combinations of different discursive elements are formed and transformed’, and how ‘the value of each subject position is shaped by the constitutive effects of new differential relations’. These are useful ways of avoiding the generalising effects of ‘isms’ – modernisms, fascisms, Toryism, terms that work as broad categories, bundling together family resemblances with blurry edges. Would Balfour or Bonar-Law have had any comprehension of what Hulme and Lewis were attempting (one recalls Lewis’s account of how Asquith asked him worriedly at a party about the Vorticists’ activities in Soho – a comical tale on first glance, but there was a legitimate fear here as the Italian Futurists paved the way to the Fascist assault on liberal democracy).

Dr Henry Mead is a Senior Fellow at CARR and is the Head of Geopolitical Research, Centre for Issue and Crisis Management. See his profile here:

© Henry Mead. Views expressed on this website are individual contributors and do not necessarily reflect that of the Centre for Analysis of the Radical Right (CARR). We are pleased to share previously unpublished materials with the community under creative commons license 4.0 (Attribution-NoDerivatives).

Research for this article was supported by a European Research Council Starting Grant (TAU17149) “Between the Times: Embattled Temporalities and Political Imagination in Interwar Europe.”