This insight analyses a group which describe themselves as: “a localist organisation, made up of volunteers passionate about England and localism, who work to promote regionalism as well as environmentalism and the success of small businesses.” The group’s Instagram contains posts promoting greater democracy through regional devolution, criticising profit made by billionaires during the Coronavirus pandemic, as well as quotes from environmentalist and Britain’s national treasure, Sir David Attenborough. The a-political, even wholesome, content is topped with a cute cartoon robin as their logo. Consequently their aesthetic is indistinguishable from larger environmental and conservationist groups like Now This Earth and Campaign to protect Rural England.

Established in March 2020, the group is prominent on Facebook (1,140 followers) and Instagram (1,750 followers). Additionally, their Spotify podcast broadcasts monthly where the small team of volunteers discuss topics such as environmentalism and youth politics. Activism to date includes unveiling a banner in a shopping centre which criticised Primark for its use of sweatshops, and distributing leaflets prompting people to shop locally. Yet these are not Greenpeace or XR activists. As research by Vice and the Anti-Facist Research Collective illustrates, the group in question, Local Matters (LM), has a radically different agenda. 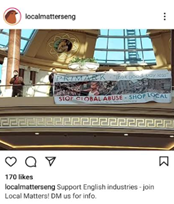 Who are Local Matters?

As the research states, LM’s founders are actually ex-Generation Identity members who wanted to make the group’s racist ideology more palatable to the general public. This becomes evident through analysing LM’s manifesto, with the group serving as an important case study of a radical right organisation subscribing to what head of the CARR Ideology Research Unit Balša Lubarda labels as Far-Right Ecologism (FRE). To Lubarda, the notion of blood and soil “is at the core of FRE”, outlining a holistic worldview of, but not limited to, three fundamental elements: organicism, spirituality, and naturalism.

In their manifesto titled ‘A Manifesto for a Twenty-First England’, LM claims that the “organicist philosophy is at the heart of Localism”, meaning they view society as a complete, organised, and homogeneous living being. Thus LM desires, what they call, a “localist England”, which “would take the form of an organic constellation of regional autonomies, not imposed from above but culturally rediscovered by culturally distinct communities.” Consequently, they advocate for a federalist state, with “organic” regions such as Kent and Cornwall holding political autonomy.

The spiritual component of FRE is, for LM, expressed as a mystical connection between an ethnic group and their soil, formed over generations. Articulated in the chapter titled ‘Cultural Renaissance’: “Localists are deeply rooted in the sense of heritage and destiny shared by their cultural kin… that shaped their communities for thousands of years.” Yet LM believe that modern forces, particularly urbanisation, are contributing to a spiritual decline; “in a shift away from rural villages and mining towns into urbanised city-space, England has not only lost its manufacturing or its spirituality, but a part of itself in the form of communities formed around these roots.” Thus, LM views cities as rootless and soulless. Alternatively, the countryside, rooted in nature, has a soul, one worth protecting.

These ideological components lead to the belief in the unity of the natural and social world, expressed as social naturalism. LM conceptualises the preservation of the nation as akin to the conservation of biodiversity, viewing immigrants as implicitly analogous to invasive, non-native species. They attempt to justify this for two reasons, firstly that foreign cultures are incompatible with the organic cultures of the native English. Secondly, LM views immigration as the primary cause of overpopulation. Regarding the former, LM claims that communities are; “no longer athletically English, not only in their naturally changing values, customs and culture, but in the absence of the English people themselves.” With the latter, LM subscribes to the fear that overpopulation causes environmental destruction, which, they state, is driven by mass immigration. To LM, overpopulation is draining England’s resources, alluding to housing shortages, while also causing environmental degradation. Thus, the combination of these beliefs leads to the blood and soil worldview central to FRE. This translates into LM’s policies, namely the call to end all immigration and repatriation of existing immigrants, all (allegedly) in the name of environmental protection.

The significance of Local Matters

While LM may appear to be just a group of ‘edgy’ A-Level politics students, the group warrants analysis for three key reasons.

First, LM represents an ideological shift in recent years of far-right organisations who previously embraced environmental and climate denialism, yet are now placing a greater importance on ecological issues. Prominent researcher on the alt-right and eco-fascism Blair Taylor, argues that the alt-right’s sympathy with previously taboo ideas such as Nazism has enabled the movement to rediscover links between racialist and ecological ideologies. Taylor states that the editor of the alt-right site Counter Currents describes himself as a “very pro-ecological person”, justifying this statement by alluding to how the early ecology movement was pioneered by those on the far-right. Even far-right organisations who previously cared little for issues of ecology, such as Marine Le Pen’s National Rally in France, have started to claim their green credentials, calling for Europe to become an “ecological civilization”.

Second, LM serves as a study of how some FRE groups are linking environmental issues to immigration and overpopulation, in a clear attempt to shift the overton window towards a more reactionary and anti-immigrant form of environmentalism. With the environmental discourse in recent history being dominated by the left, effective strategies to combat an emerging far-right environmentalist narrative require urgent cultivation. A recent empirical analysis of 22 European far-right parties reveals an emergent discourse of what the authors conceptualise as ‘ecoboarding’, which identifies immigration as the cause of environmental degradation. In 2018, the British National Party perpetuated this narrative claiming they were the only party to, “recognise that overpopulation – whose primary driver is immigration is the cause of the destruction of the environment.”

Finally analyses of LM and similar organisations are crucial in efforts to halt encroachment from the far-right into mainstream environmental groups. Far-right infiltration into green organisations has historically proved a problem, inadvertently granting legitimacy to their racist views. This has already occurred to a limited extent with former Green Party leader Natalie Bennett and deputy leader Amelia Womack, who previously followed LM on Twitter, while a founder of LM was also elected onto the executive committee of the Yorkshire Party.

Overall, LM serves as a crucial example of how the far right are engaging with issues of ecology, during the emerging environmental crisis. Their aesthetic of a-political and friendly public facing content is a conscious effort to give legitimacy to the promotion of their blood and soil worldview through the guise of environmentalism. As the climate crisis worsens and climate change science becomes increasingly harder to deny, anti-fascists, environmentalists and the left more broadly need to understand this emerging trend and be ready to challenge the solutions the far right  propose to environmental degradation. As renowned Canadian author and climate activist Naomi Klein crucially states in an interview with Democracy Now, “the only thing scarier than a far-right racist movement that denies the reality of climate change, is a far-right racist movement that does not deny the reality of climate change”.

Louis Dean is a Research Intern at the Centre for the Analysis of the Radical Right.

© Louis Dean. Views expressed on this website are individual contributors and do not necessarily reflect that of the Centre for Analysis of the Radical Right (CARR). We are pleased to share previously unpublished materials with the community under creative commons license 4.0 (Attribution-NoDerivatives).