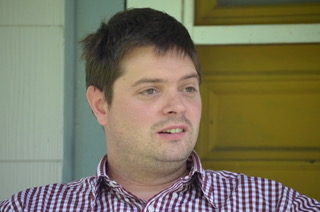 Dr Clark is the editor of the CARR Book Reviews.

Dr Clark holds a BA (Hons) in History and Religious Studies from the University of Sydney (Australia) and an MA and PhD from the University of Pittsburgh (USA). He has taught high school in Australia and Romania, and held an Assistant Professorship at Eastern Connecticut State University before joining the University of Liverpool. His prize-winning book, Holy Legionary Youth: Fascist Activism in Interwar Romania(Cornell UP, 2015) approaches Romanian fascism by asking what membership in the Legion meant to young Romanian men and women. Viewing fascism “from below,” as a social category that had practical consequences for those who embraced it, he shows how the personal significance of fascism emerged out of Legionaries’ interactions with each other, the state, other political parties, families and friends, and fascist groups abroad. His research on the Legion has been published in a variety of specialist journals, including Cultural and Social History, Patterns of Prejudice, and Contemporary European History.

Dr Clark also writes on theology and nationalism, the relationship of the Romanian Orthodox Church with religious minorities, and religious beliefs and practices in peasant and working-class communities in interwar Romania. He writes a regular blog on the theology, practice, history, and sociology of religion at www.wordsbecamebooks.com.

Dr Clark is a specialist in the history of fascism in interwar Romania, including antisemitism; social movement activism; violence; fascist recruiting among peasants, workers, and intellectuals; fascist masculinities and femininities; music and collective singing in fascist movements; and the fascist politics of ethnic minorities. He also writes about anti-communist resistance movements; gulags in Communist Romania; theology and nationalism; lived religion; visionaries; sectarianism; and the history of the Romanian Orthodox Church.