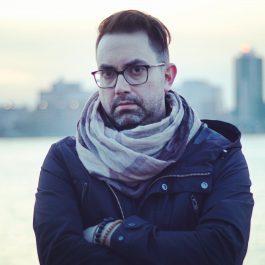 Michael Colborne is a journalist who has written extensively about the radical right. His current work focuses on the far-right in central and eastern Europe, with a special interest in transnational radical right extremism.

Michael has written in detail about the far-right in Ukraine, both as a freelance journalist and as a contributing team member at investigative journalism site Bellingcat, where he has monitored and investigated far-right activities in Ukraine as part of the Bellingcat Monitoring Project. Michael’s articles about Ukraine’s far-right have explored, for example, the Azov movement’s international ambitions (Haaretz), neo-Nazis sharing and selling translations online of a radical right extremist terrorist manifesto (Bellingcat), the Azov movement’s ideological roots in the French Nouvelle Droite (Foreign Policy) and a Ukraine-based neo-Nazi group of Russian origin (Bellingcat).

Michael’s further work across central and eastern Europe includes an investigation of the relationships between Croatian and Ukrainian radical right groups, which he completed as a 2019 Resonant Voices Fellow with the Balkan Investigative Reporting Network (BIRN). Michael has written about Islamophobia in the Czech Republic (Coda Story), right-wing historical revisionism in Croatia (Foreign Policy, co-authored with Una Hajdari), neo-Nazi marches in Bulgaria (The Forward), radical right rhetoric in Hungary’s elections (Haaretz), neo-Nazi politicians in Slovakia (Coda Story), Holocaust memory in Romania (Haaretz), international far-right fashion and subcultures (The New Republic) and neo-Nazi graffiti in Bulgaria (Haaretz). He was also, in 2018, a co-recipient of a “Reporters in the Field” grant from n-ost/Robert Bosch Stiftung to explore the politics of mosque (re)construction in the Balkans.