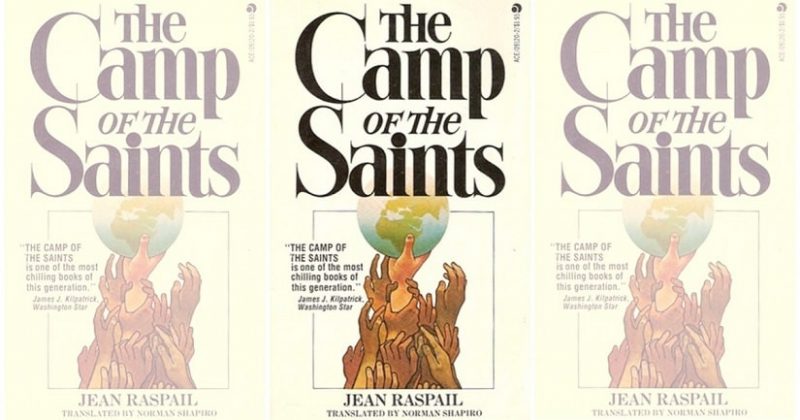 The Camp of the Saints is a dystopian French novel depicting the invasion of France by a flotilla of bestial, feces-eating immigrants from India. It was written in 1973 by a far-right monarchist named Jean Raspail. The book describes the takeover of France by “swarthy hordes” of Indians, “grotesque little beggars from the streets of Calcutta,” who are welcomed by treasonous white elites who, rather than turn the Indians away, “empty out all our hospital beds so that cholera-ridden and leprous wretches could sprawl between white sheets … and cram our nurseries full of monster children.” Toward the end, white women are forced into “whorehouse[s] for Hindus.”

The book[1] was initially translated into English by a mainstream American publisher in 1975, but it only took off in later years with its republication by racist anti-immigration activists. In 1983, heiress Cordelia May Scaife — the single largest funder of John Tanton, the racist architect of the modern anti-immigration movement — paid for its distribution in the United States.[2] Twelve years later, in 1995, Tanton’s Social Contract Press published it again and continued to sell it for decades. Today, it remains one of the two most important books in the white supremacist canon, the other being The Turner Diaries, a neo-Nazi novel depicting a future race war in America. It has been lauded by Steve Bannon,[3] one-time senior adviser to then-President Donald Trump, Stephen Miller, [4] Trump’s top immigration policy adviser, and white supremacists in Europe and elsewhere around the world.

A few excerpts[5] give a sense of the novel’s bloodthirsty tone:

[As the refugee fleet arrives on French shores, a noble old professor kills a fellow white who is depicted as having sold out his race and civilization. Afterwards, as he celebrates the killing, the professor reflects on the loss of white pride.] The old professor understood. That scorn of a people for other races, the knowledge that one’s own is best, the triumphant joy at feeling oneself to be part of humanity’s finest — none of that had ever filled these [white] youngsters’ brains, or at least so little that the monstrous cancer [of compassion for other races] implanted in the Western conscience had quashed it in no time at all.

[At one point, a French town, faced with the threat of diseased foreigners, issues an edict requiring Arabs to get a certificate of health before using its public swimming pools.] Retaliation took many forms. … A hundred nice French girls, teaching school in Algeria, were suddenly hauled into the hospital and spread on the stirrups to be plumbed and explored by a squad of medical student commandos, whipped up to a frenzy. Two of them died as a result…

[The book repeatedly characterizes non-whites as sexual carnivores, as in this scene aboard the refugee fleet.] But in time, very slowly, the flesh [aboard the ships] began to seethe. … Perhaps it was the heat… . Most of all, the natural drive of a people who never found sex to be sin. … [E]verywhere, a mass of hands and mouths, of phalluses and rumps. … Young boys, passed from hand to hand. Young girls, barely ripe … waking to the silent play of eager lips. … Men with women, men with men, women with women, men with children… . And so, in a welter of dung and debauch — and hope as well — the Last Chance Armada pushed on toward the West.

[As the Third World slaughter of whites picks up speed, the book describes a scene in a pig-processing plant in which a black man slaughters his white boss after being asked to kill pigs more quickly.] “Sure ‘nough boss,” one red-spattered black said, “we can sure ‘nough do one more at least…” The white man felt no more pain than any of the other pigs on the line. Stunned, hoisted, slaughtered. … [Hung from a hook, the murdered boss’ body] caused … no special disgust [among the black workers]. They had seen such things before, after all. At market, in the Congo.

[As the novel nears its end, Lydie, depicted as a traitor to her white race, becomes a sexual plaything for the dark-skinned refugees who have now seized power.] Lydie … died in Nice, in a whorehouse for Hindus… . At the time, each refugee quarter had its stock of white women, all free for the taking. (One of the new regime’s laws, in fact. In order to “demythify” white women, as they put it.) … [In the end, Lydie, along with other white female sex slaves, is confined by the “Hindus” to their] “White Female Practice and Experimentation Center.”

[The novel ends where it began, with the arrival of the refugee fleet in France.] [F]irst to land were the monsters, the grotesque little beggars from the streets of Calcutta. As they groveled through the wet sand like a pack of basset hounds, or a herd of clumsy seals exploring an unfamiliar shore, with their snorts and grunts of joy, they looked like an army of little green men from some remote planet. … Yes, the country [France] would suit them fine. No question.

The explicit racism that characterizes the novel did not deter Tanton, who was “honored” to publish the “prescient” story. “We are indebted to Jean Raspail for his insights into the human condition, and for being 20 years ahead of his time. History will judge him more kindly than have some of his contemporaries,” he said.[6] Raspail, in an afterword special to Tanton’s edition, wrote about his fears that “the proliferation of other races dooms our race, my race, to extinction in the century to come, if we hold fast to our present moral principles.” The Social Contract Press called it “a haunting and prophetic vision of Western Civilization overrun by a burgeoning Third World population.”[7]

K.C. McAlpin, who then headed Tanton’s umbrella organization US Incorporated, wrote in a 2017 essay published in The Hill that the novel was “not racist” but merely truth-telling at its best. “Forty four years and tens of millions of migrants later, refugees and changing demographics are widely viewed as an existential threat to Europe’s historic identity. But while more and more people recognize Raspail’s amazing foresight, establishment liberal opinion attempts to demonize and distort the book’s message more egregiously than ever,” McAlpin concluded.[8]